All opinions expressed here within are just that. Opinions. Caveat Emptor.

If you reached this page via an old link, please use https://hogranch.com 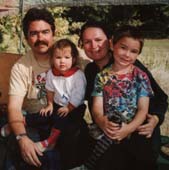 Pictures from mid 2008 forward are on Smugmug now...

photo album mostly, this is pictures up to 2004.
We lost our CoolPix 950 camera

One of my favorite pastimes is listening to live music by talented musicians... One of the best places to do that is at the Strawberry Music Festival, held each Memorial Day and Labor Day weekends at Camp Mather near Yosemite National Forest.

A musician I greatly admired once wrote this interesting piece about the sad state of American's mental health.

Long, long ago and far, far away, I thought Windows95 was pretty cool stuff.  Here's some snapshots I took when I was invited to the main event in Redmond of LAUNCH '95.

Here's a disorganized collection of files. There's some assorted bitmaps there, including a aerial(space) view of where I live (see the little yellow squiggle?), maybe even a few recipes.

Here are a bunch of pictures of folks and whatever from about 15 years ago when I worked at Digital Research. (Can YOU say CP/M? There, I knew ya could!)

Some of my favorite stale links...

Three judge panel in Philadelphia votes 3-0 that the CDA is not Constitutional.